Whew! It’s been a few weeks since I’ve done a blog post.. That last week of school before break was crazy, and Christmas break FLEW by! To get back into the swing of writing, I thought I’d share my 2013 with you.  Saw this on Jenna’s blog over at Speech Room News and thought it was fun, so here goes! 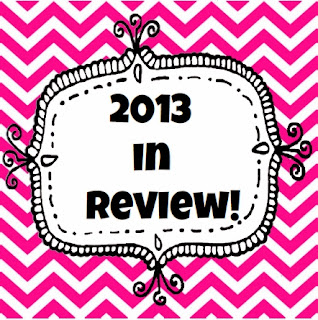 What did you do in 2013 that you’d never done before?
Got a puppy! We rescued her from the pound at 4 months. She’s a black lab/border collie mix! (we think) 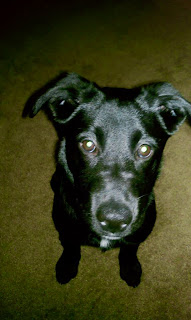 Did you keep your new years’ resolutions, and will you make more for next year?
My New Years’ resolution last year was to make more trips back home to visit friends/family, since I only went back two weekends in all of 2012, and I’m less than 4 hours away. I did keep it, and made 4 trips back, but two of them were only quick 24-30 hours in town trips. I’m going to keep working on it! 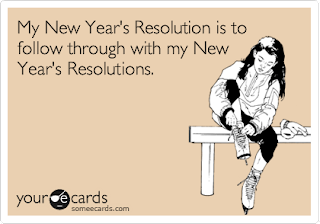 Did you visit anywhere exciting?
Unfortunately not last year.. but we did Hawaii the year before and will probably take another trip this summer!

What date from 2013 will remain etched upon your memory, and why?
Hmm.. Maybe May 25 because that was the day we got our puppy, and I was SO excited! The excitement wore off for about 6 weeks while we dealt with dominance issues and I felt like my dog hated me (haha), but after a lot of training and patience (LOTS of patience!), we finally made it through most of those issues!

What was your biggest achievement of the year?
Paying off my student loans!! 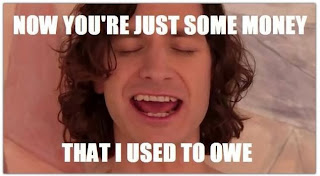 What was your biggest failure?
Hmm… not learning to sew like I swore I would over the summer!!

Did you suffer illness or injury?
Surprisingly, no injuries! Yeah!! 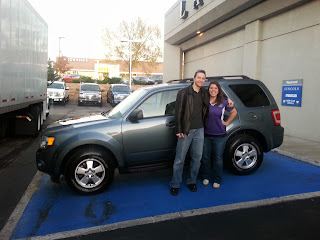 It replaced my husband’s old 1994 Jeep Grand Cherokee with 220,000 miles on it.. The A/C had been broken for many years, the rearview mirror was superglued on, you had to bang on the dash for the radio to come on (but even then it was still a tossup), the back doors wouldn’t shut in the winter when it got really cold (unless you knew the trick), it rattled really loudly… the list goes on & on! We were happy to finally get rid of that thing!

Where did most of your money go in 2013?
Student loan payments.. but we got it done!

What did you get really, really, really excited about?
Being nominated for an EduBlog award for “Best New Blog!” I was SO honored/thrilled/humbled that anyone would think my blog was worthy of this nomination, amongst so many other great new bloggers. 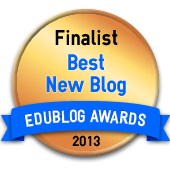 What song will always remind you of 2013?
Probably “Blurred Lines” and “Thrift Shop”

What do you wish you’d done more of?
1. Crafting!! I have SO many fun things pinned on Pinterest.. so many that often times, when I go to pin something, Pinterest gives me that “Psst! You’ve already pinned this before” message.. *hangs head in shame* … If only I did ¼ of the crafts I have pinned… 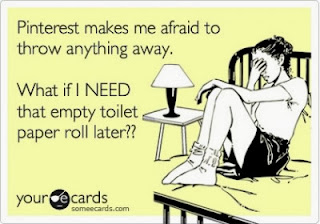 2. More road trips back home. I seem to typically just go back when there’s a special occasion going on, which is perfect for seeing family (i.e. graduations, weddings), but then it can get really tricky to fit in time to see my girlfriends from home. My goal this year is to do more trips “just because” so I can do more of that. I have an amazing group of girlfriends from high school that are just incredible ladies… And even if I only see them 1-2x a year, we always pick up right where we left off! 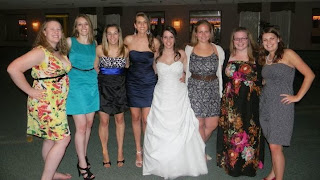 My all-time favorite picture of us!

What do you wish you’d done less of?
Procrastinating 😉 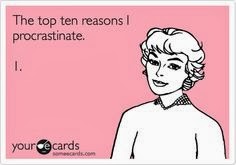 How did you spend Christmas?
Assembling these cute reindeer donuts 😉 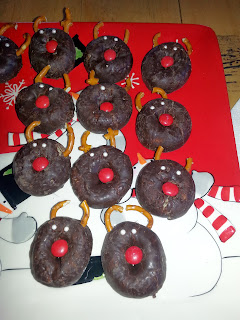 I spent Christmas at my in-laws’ house for the first time.. They just moved to the area in the Spring, so we did Thanksgiving with my family and Christmas with my husband’s parents!

One of my favorite gifts? These crocheted Jayhawk hats that my husband’s grandma made for all the grandkids. One word: Awesome. 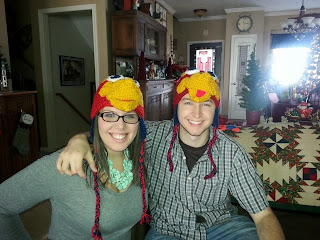 My husband spent Christmas morning going on a scavenger hunt to find his gift! I got him a Nexus 7 tablet and some stocking stuffers, but I didn’t want him to suspect a Nexus when there was only one gift under the tree.. so I wrapped empty boxes and put empty gift bags under the tree with soup cans, etc… in them to weigh them down… ha! When we got to my in-laws’, I scattered them around the house.  Each box/bag had a clue taped to it/in it as to where he could find the next gift!

What was your favorite TV program?
So many! The Voice, Big Bang Theory, New Girl, Criminal Minds, How I Met Your Mother, Sons of Anarchy…

What was the best book you read?
I’m ashamed to say I didn’t read a whole lot of books last year! But, I did read:
1. “The Journal of Best Practices: A Memoir of Marriage, Asperger Syndrome, and One Man’s Quest to Be a Better Husband” It’s about a guy with Asperger’s who is married to an SLP. It was interesting, funny, and a really quick read!

3. I tried reading Gone, Girl but only got 5 chapters in before I had to return it to the library.. and I hadn’t really gotten into it during those 5 chapters. Am I the only one?! I heard SO many great things about it so I was disappointed I didn’t get into it!

What was your greatest musical discovery?
“Hey Pretty Girl” by Kip Moore… My husband often times starts out his texts to me with “Hey pretty girl” (I know, I’m a lucky girl! :))  so I fell in love with the song immediately.

What did you want and get?
I thought about starting a blog for a while.. then I finally took the plunge! I also got some help with my caseload this year.. we hired another SLP and she took two pre-k classes from me. She has been great and I am so happy we have her!

What did you want and not get?
A winning lottery ticket 😉

What did you do on your birthday, and how old were you?
I turned 27 in December and celebrated my birthday for about a week straight! My coworkers spoiled me at work, with food, gifts, and sweet card! 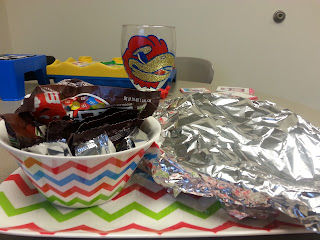 They know my chevron obsession all too well!
Not pictured: a mini potluck lunch!

It was FREEZING that night, so my husband picked up some of my favorite food after work and surprised me with it at home—it was perfect because I didn’t really want to leave the apartment again! We ate that and watched The Santa Clause– our first Christmas movie of the season!

A couple days later, I did the Ugly Sweater 5k in the morning (it was 7 degrees that morning.. so cold!) 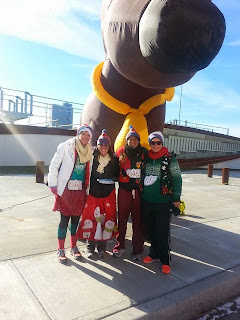 I wore a tree skirt as part of my attire 😉

Later that night, I had an ugly sweater birthday party at my apartment! 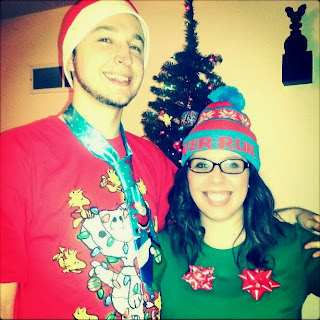 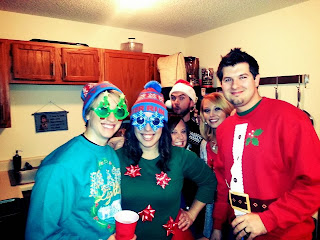 (you can’t tell but I’m wearing the same tree skirt I was wearing in the picture from the race!)

My mother in law took me & my husband out to lunch the next day, and a couple days later, a friend of mine came over to celebrate.  We had yummy food and wine, and got crafty! 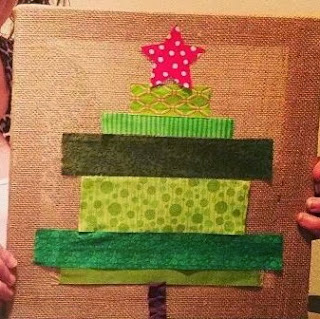 We made Christmas trees from fabric scraps… This isn’t a very good picture but they actually turned out pretty cute!

What’s one thing that would have made your year immeasurably more satisfying?
Nothing that really stands out… 2013 was pretty good to me!

How would you describe your personal fashion concept in 2013?
Maxi dresses, scarves, and bubble necklaces. I discovered Be Inspired Boutique, and they had the CUTEST dresses over the summer! I have a ton of scarves already, but found out the jersey-knit infinity scarves that GroopDealz has periodically are the softest, most amazing scarves ever! And for the first half of 2013, I wore the bubble necklaces a lot… now I’m back on my scarf kick!

What kept you sane?
Hilarious ecards from someecards.com — Sometimes if I’m having a bad day, I’ll just browse them on Pinterest for a while and laugh. A lot. 🙂  And, trying to take things one day at a time! Sometimes, that’s all you can do!

Who was the best new person you met?
Our new SLP, speech paras, and our 2 new prek teachers!

Tell us a valuable life lesson you learned in 2013?
If you want something, ask for it. It sounds simple, but I don’t like to ask for things, so this was actually tough for me. But, it’s been working! 😉

What are your new years resolutions for 2014? 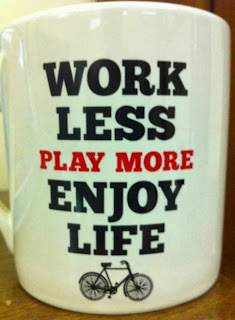 That about sums it up!!  What are your New Years resolutions??