You guys. How have I gone so long without popper toys in therapy?!  I am in love with the pig and penguin poppers I got for Christmas, and so are my students. We had to set some ground rules at first– you know, things like “We don’t aim the ball at teachers or our friends” and discussions of, “No, the animals are not “farting” or “pooping” but are just blowing out of their mouth.” (Sigh.. little boys and their early obsessions with bodily functions.. ha ha).  Once the ground rules were set, though, the poppers have been a HUGE hit in therapy over the last few weeks!

Initially, I just thought they’d be fun as a reinforcer.  Turns out, they’re good for a lot more than that! Below, I’ll share some different ways I’ve used the poppers! 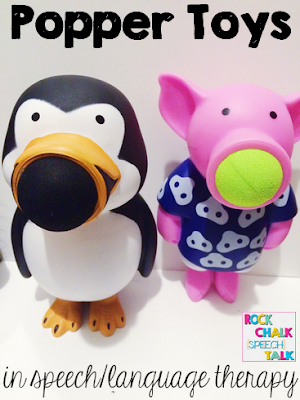 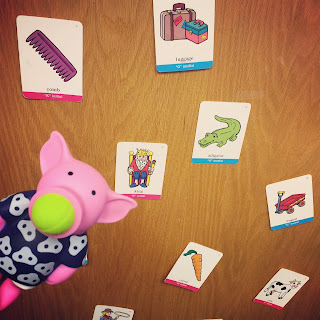 One of the first activities I did with the popper was put some artic cards up on my door and have kids aim the popper at a card of their choosing.  For mixed groups, I designated each student a color and they had to aim for their color when it was their turn.  My particular poppers also work great for /p, b/– ball, pop, penguin, and pig! You can use a carrier phrase like “Hit the ___” or “Pop the ___” when you aim at cards, too.  Carrier phrases are a great strategy to use with apraxic kids or your artic kids working at the phrase level.

(PS– Lisette from Speech Sprouts had an AWESOME idea to practice the /p/ sound with her poppers- check it out on Instagram!)

2.  Pronouns
I’ve stuck pronoun cards on the door, too, to work on “he,” “she,” and “they.”  BUT, I’ve also worked on that pesky “I” (If you gave me a dollar for every time I heard “my” or “me” instead of “I” in preschool… Well, I’d have enough to buy myself a couple Starbucks beverages on a daily basis ;-)).  You can have students aim at cards on the door, or, depending on the room setup, you can aim at different objects around the room- posters, the door, cabinets, a chair, etc…. and have them say “I’m aiming at ___”

OR, you can decide to designate your popper animal as a female or male, and practice using he/she.  For instance, “He hit the ___”  This would be an easy way to work on pronouns in a mixed group with artic students without having to get out extra materials (because, in the words of Sweet Brown.. “Ain’t nobody got time for that!”)

3.  Increasing MLU
There are so many short 2-3 word phrases that you can incorporate while using the poppers with your late-talkers that may only be using single words…
“My turn” / “Your turn”
“Ball please” “Pig (or whatever your popper is) please”
“Ball in” “Put ball in” “Pop out” “Pop ball out”
“Green ball” “Black ball” (or whatever color balls come with your popper)
“Pop pig” “Pop penguin” “Pop ball”
“Hit ___”

4.  AAC- Core vocabulary
You may have seen this idea on my Instagram, too– I used the poppers in conjunction with AAC with one of my nonverbal kids, and oh man, did he LOVE it! We targeted “in” to put the ball in the mouth, but you could also target core words such as: out, my/my turn, want/want turn, go, put/put in, more, and play.  My one little guy kept verbally saying “ooooh!” and “whoah!” when we played– it was the most verbal I had heard him all school year! 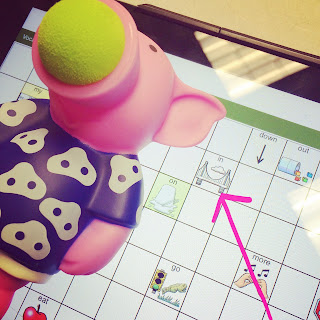 5.  AAC- PECS
I’ve also used the poppers with students using PECS.  They had to exchange a picture of the ball in order to get one to place in the popper’s mouth.  It’s a highly motivating activity, trust me!

Which one is your favorite popper animal? Have you used them any other ways besides the ones I’ve listed? Let me know in the comments below!

**
PS- An exclusive, behind-the-scenes shot (I know- you’re really hitting the jackpot with this one- ha!) of trying to take a photo of the poppers at home, with Bruce, one of my dogs, who just wants to play with them SO badly but was already told “no.”  Hilarious!  #puppylife #rufflife 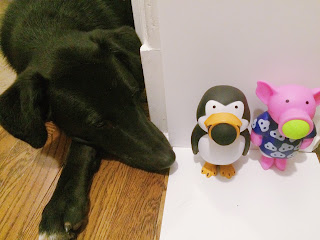 PPS- A couple days after I had to tell my dog not to play with them, my husband came upstairs with one of them and shot it at me while I was working on this post– Popper toys are fun for both dogs and humans…kids and adults.. a multi-faceted toy anyone can enjoy! 😉