At the end of the 2011-2012 school year. all certified staff members in my district received an iPad, as a result of a big push to increase use of technology in the classroom (which, ps, I’m not sure how I ever lived without an iPad–now that I have one, I don’t think I could go without it!).  “Use more technology” has been a common recurring theme in the therapists’ performance evaluations by our SPED director.  I’ve used plenty of articulation and language-based iPad apps and have used a couple different interactive websites, but struggled a bit with figuring out how to utilize technology  in other ways that were appropriate and doable for my preschoolers.

Within the last few months, I’ve seen a few other SLPs blog about their use of QR, or Quick Response, codes.  I’m sure you all know what QR Codes are– they’re everywhere! 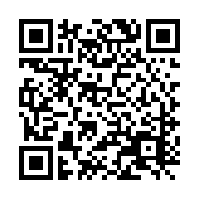 The first time I used one, actually, was in Walmart last Fall when I was looking to buy new lamps for our nightstands in our bedroom.  I found a base I really liked, and it had a QR Code on the attached tag.  Scanning the code took me to a video that showed a variety of different lamp shades that went with the lamp base– pretty cool! Until, you know, I set my phone down on the shelf to try some of the different lamp shades it suggested, and then subsequently forgot it was there and left the store– whoops! (then I was silently cursing the QR tag that just a couple hours before had seemed so cool!)

At any rate, while the QR Code activities I’ve seen from other SLPs looked great, many of them were a bit too high level for most of my caseload.  I needed something simple, with no reading involved.  I happened to stumble across this post on Pinterest the other day, where a preschool teacher used QR Codes for sight words, using audio files– genius! Feeling inspired, I went to work on a new game to use with my caseload– a farm-themed basic concepts bingo game using QR Codes. 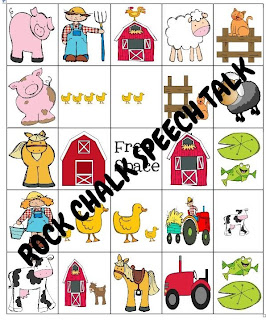 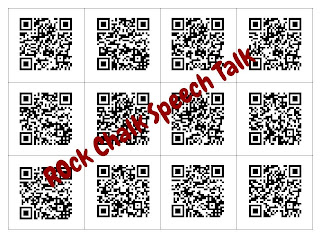 How I made it: I made 5 different Bingo cards, with each picture portraying a different concept (24 basic concepts in all). Then, using recordmp3.org, I recorded myself saying a sentence to describe each picture using a basic concept word (i.e. “The pig is dirty” or “The frog is above the lilypad.”)  When you save an audio clip on that site, it gives you a URL where your clip is saved, which you can then plug into QR Stuff under “web address” to make your QR code for each separate audio clip.  I’m sure there are many other websites out there that do the same thing, but those two were very user-friendly!
How to use it:  You’ll probably first want to cut out, back with cardstock, and laminate the QR cards for durability.  With this game, students can draw a QR card and scan it with a scanner app using a smartphone, iPad, or iPod Touch.  When they scan the QR Code, audio will play and they’ll hear a sentence (i.e. “The pig is dirty” or “The frog is above the lily pad”).  The students will then cover the corresponding picture on their Bingo card. First one to get 5 in a row wins! Farm vocabulary and basic concepts simultaneously– Easy peasy!  This activity could easily be used in pull out therapy or in class during small group instruction.  You can grab a copy of it here.  Note: You will need to have a WiFi connection to hear the audio played.  The app I used to test the codes was “QR Code Scanner Tool” (free!) for the iPad.  It’s pretty seamless with this activity.  Download it here
Check out this great post on using QR Codes to give your contact information to parents, too!