One new thing I’m doing this year is going into the preschool classrooms during small group instruction time to be my own small group rotation.  Each teacher does it differently, but typically the class is broken down into 3 separate groups, and the kids rotate to a new group every 6-7 minutes.  Prior to this year, the preschool teacher would be one small group, while two classroom paras would run the other two small groups.  This year, typically, it will be the teacher doing one group, a classroom para doing another group, and me doing one group.  Our OT will be coming in sometimes and doing a fine motor small group, as well!

For my first week in the small group rotation, it was Brown Bear, Brown Bear week.. so I did Brown Bear Bingo with my kids! 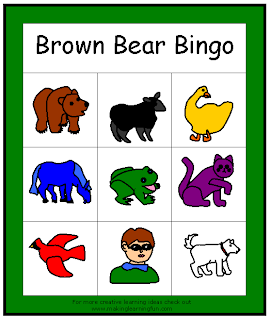 I pulled the pieces out of a brown paper bag with a bear face on it, and gave them clues as to what animal I had picked (i.e. This is an animal that likes to hop and lives in a pond..).  I had to adapt this for each group, as some kids were at the level where they could do some basic inferencing, while others needed something much simpler.  Some other ways I did this were:

I used the chips from our Chipper Chat set for the covering pieces, and at the end, they got to use the “magic wand” to swipe over their card and pick up all the magnet pieces (which, of course, they thought was the coolest thing ever!)

If you’re an early childhood SLP, how do you incorporate yourself into the classroom? Do do you large or small group time in the classrooms? Center time? I’d love to hear from you!