A couple weeks back, we had our farm theme in PreK.  One of the books I used was “Sheep In A Jeep” by Nancy Shaw (Amazon link here).

While I was researching ideas on Pinterest (where else?) to use with this book, I saw this craft, which inspired this idea to make a jeep to use in speech to go along with the book! 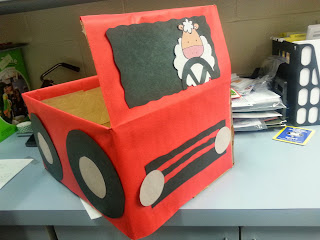 How cute did this turn out?! To make the jeep, just take a rectangular box and cover it with red paper (mine is covered with bulletin board paper that we have in the staff workroom at school).  Fold all the flaps down except for one in the front for the “windshield.”  The wheels & everything else are just made from black & gray construction paper.
What did we use it for? I used it for a beanbag toss with different farm animals.  The sheep went driving and picked up his farm animal buddies along the way 🙂 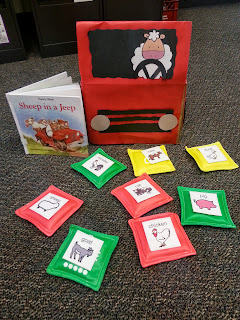 Here is a board from Boardmaker Share you can download for farm animal pictures.
Some different ways I used it:
As you can see, there are a lot of different ways to use this activity.. and I am all about adapting an activity to target a variety of different goals! The kids really liked getting to stand up and move around a bit during speech– their little bodies can’t stay still for long!

What are some of your favorite activities to use with Sheep in a Jeep? I’m always looking for new ideas!