Yesterday, I shared some of my favorite activities for getting my kiddos up and moving a little bit during speech.  Today, I’m going to share some of my favorite Halloween crafts to do in speech this time of year.
First up is Marshmallow Ghosts, a craft that makes me laugh every time I pull it out because of what one of my preschool kids said to his teacher after we were done making it.. 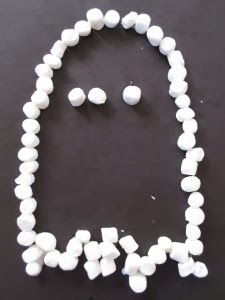 This kid was SUPER motivated by food.  He kept asking the whole session if he could eat the marshmallows.  I told him that he could have a couple to eat when we finished making our ghost.  He ran back into his classroom afterwards and told his teacher, “Hey! That lady out there shared with me!” (We were doing therapy out in the commons/pod area).  It became a running joke the rest of the year– granted I was new to him that year, but I had worked with him 4 days a week for 10 or 11 weeks at that point and he apparently still had no idea what my name was.. I was just “that lady out there” who shared with him!
Anyway, I digress.. Back to the craft! I let the kids have 1 marshmallow for every repetition.. so 5 repetitions=5 marshmallows to glue on.  They’re motivated to do more repetitions, so it’s a win-win for everyone!  If you can’t use food at your school during therapy sessions, you could use cotton balls as an alternative and cover the whole ghost rather than just the outline.
Another craft we make is another one I’m sure you’ve seen on Pinterest.. Spooky Speech Spiders! This pin was my inspiration. 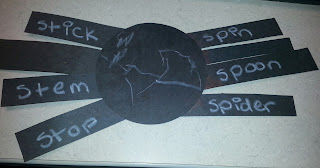 This craft is super easy to prep– we have die cuts in our workroom, so the body is just the large circle die cut, and the legs are strips just cut with the large paper slicer.

I’ve had a couple preK parents tell me they really enjoy the crafts sent home from speech because then they know what sounds they’re working on that week.  After every word they practice, they get 1 leg to glue onto their spider.  I write the words on the legs in white crayon, and when we’re done, we go back and practice all the words again!

A new craft we did this year was for the song/story 5 Little Pumpkins.  I kept seeing activities for 5 Little Pumpkins all over Pinterest (I guess it’s pretty obvious at this point I have an addition to Pinterest…), so I decided to incorporate it into my therapy and make it into a craft! 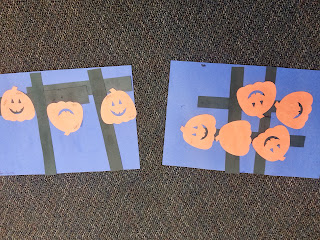 This was also an easy craft to prep.. again, just using a pumpkin die cut in our staff workroom and prepping strips by using the paper slicer.  For the speech kids, they got to glue a strip of paper (part of the “fence” / “gate”) after every set of 5 repetitions.  For language kids, we worked on Halloween-related WH questions and glued a piece of the craft after every question.  I also targeted some basic concepts like top/bottom and up/down vs side to side while we built the fence & put on our pumpkins.
What are some of your favorite crafts for Halloween time?