It’s Dinosaur week here in preschool.. one of my favorite weeks!  I wanted to share a DIY I did this week to use for small group rotations in the classrooms.. Describing Dinos! 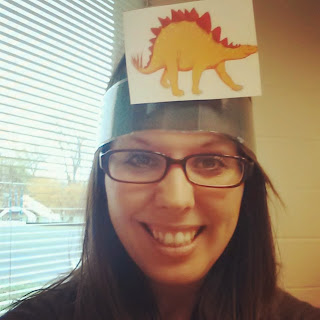 This is pretty much just a DIY version of the “Hedbandz” game.. I took 3 strips of black construction paper, laminated them, and then stapled them together to fit around my head.  I put a Velcro dot on the front center of the “headband”, and attached Velcro to the bottom of each laminated dinosaur picture I was using to be able to easily interchange the pictures.  I just found these images from Google searches and Graphics Factory! 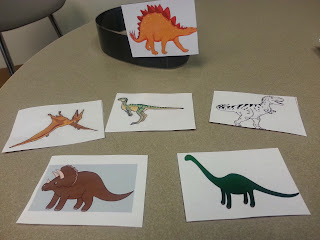 For the activity, I had groups of 3-4 kids at a time, and each one had to take a turn describing one aspect of the dinosaur on my head to help me guess which one it was.  I had made two sets of pictures– one to go on my head (laminated with Velcro) and another set to lay out on the table as my choices when I was guessing.
It was a great way to expressively target some basic concepts like long/short/tall, etc.. I created this visual to help them learn different ways to describe a dinosaur: 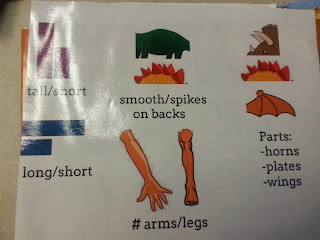 I used this with my afternoon kids because they’re older and most are at a higher level than my morning kids (many are turning 5 and going to kindergarten next year, whereas my morning is full of lots of little 3 year olds!), and it worked really well for them! Challenging enough, but not too challenging, and they LOVED it.  They thought it was *hilarious* to see one of their “teachers” wear something silly like this.
I also happened to be doing this activity in a classroom when the principal walked in to do her observation of the teacher… My timing is impeccable… ha.  I turned around in my chair and there was the principal, while I’ve got a big dinosaur smack dab on my forehead! I think she appreciated it, though.. 🙂
You can download the dinosaur pictures and describing visual here if you’d like to use it!