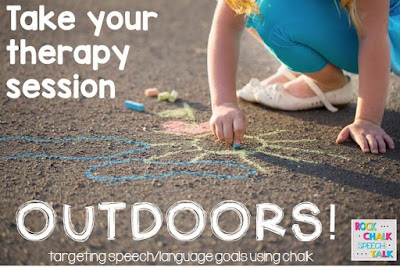 Some days (aka every day), a girl just needs some fresh air and sunshine.

While I’m fortunate that even though my room is on the small size with no cabinets for hidden storage, I DO have two windows in my room. You win some, you lose some…Who needs more storage when you’ve got sunlight, am I right?

Even if you’re lucky enough to a) have a therapy room/office that’s not a former closet or bathroom and b) have windows (I know, we’re reaching for the stars for some of you here), sometimes those windows just aren’t enough. There are days when my body is CRAVING fresh air and the feeling of sunshine on my skin. When I get to that point, I’m pretty sure my students are feeling that x10, so on nice days, when the patio off the PreK/K pod or the blacktop are open, I’ll sometimes take therapy outside of the confining 4 walls of the therapy room.
Cue: sidewalk chalk 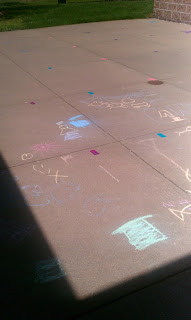 My students LOVE switching it up (I’ll never forget the time I told one of my preschoolers we were doing therapy outside with chalk– his response was “YES! YES! YES! This is the best day EVER!!”  I mean, who am I to deny a child that kind of happiness?), and there are so many goals that can be targeted just using sidewalk chalk!

b) Pronouns:  We use “he” and “she” in carrier phrases (ie “She has a…” “He has a….”).  We draw clothing items/accessories on the stick people, or draw objects around them.

3. Articulation: We draw pictures of words with their target speech sounds while we practice!

4. WH questions:  I ask a WH question, and the kids draw a picture of the correct answer.  For example, if I ask, “What does a bird build?” then they would draw a nest.

Sometimes I’ll get the “I don’t know how to draw it!” response, but I just encourage them to try their best and let them know that I don’t care what it looks like, just as long as they try! Most of them are good with this response 🙂

What other ways do you target speech and language activities with chalk??

PS- If you’re looking for handouts with more great ideas for chalk play (and lots of other outdoor play ideas!) to give to parents, check out this great “Summer Play” packet from SpeechRoomNews.  Shortly after I purchased it last May, I had a parent of a newly-evaluated student ask what he could do to work on communication skills over the summer.  Pulled this packet up on TpT, downloaded, hit “print” and off he went!